If You're a Teacher You're a Leader: McGovern, Inouye, et al.


When the four of us had finally settled into the little golf cart like train car, George McGovern introduced me to Senators Daniel Inouye and Charles Percy. 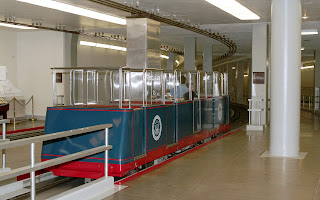 The 'train' car was on a set of tracks that ran underground from the Russell Office Building over to the Senate.  A few minutes earlier, Senator McGovern had walked hurriedly out of his inner office to greet me, saying without stopping, "I'm sorry, Dan, I've got to go over to the floor for a vote and I have another meeting in half an hour.  Walk along with me and maybe we can chat a bit after I vote."

I was reminded of that day when I read Kevin Cashman's explanation in The Pause Principle of how the three types of questioning and listening need to merge in order for breakthroughs to occur and growth to be sustained - the kind of breakthroughs and growth that also make a classroom vibrant.  Cashman says,

"For growth to have a lasting, transformative impact, three interrelated pauses that arise from questioning and listening need to merge: building awareness, building commitment, and building practice. If all three are present and informing one another, breakthroughs will occur and growth will be sustained. if we do not help others to sufficiently pause for each of these phases, the results will most likely dissipate over time."

Senator Percy's traditional quick pump was accompanied with a "Well, what brings you to Washington, young man?" When Senator Inouye enveloped my outstretched right hand in his left, it felt gentle and kind, a friendly Buddha like acknowledgement. I didn't even notice that he didn't have a right hand with which to shake.   Senator Inouye's  listening eyes told me that he, too, was interested in my mission.  I was there representing South Dakota at the NATA convention (NATA is now part of TIA.)  The main focus of that convention was to stop the Bell System's attempt to make outlaws out of their competitors, competitors like me.

It was indeed a heady day for me.  In addition to the appointment with Senator McGovern, I had met earlier with Rep. Larry Pressler,  Rep. Berkley Bedell, and Sen Jim Abourezk's chief of staff. The convention attendees from some of the big states were having trouble just getting an appointment with a staffer of one of their congressional reps.  When I stepped off the elevator and into the Senate lobby with George McGovern's hand on my elbow and Senators Inouye and Percy just behind me, I saw a few heads on very expensive pin-stripped suits turn to check me out.  These were lobbyists, and several of them had big cigars.

I shuffled my polished cowboy boots and tried not to be too conspicuous in my faux suede sport coat until Senator McGovern appeared a few minutes later to usher me out into the bright afternoon sunlight to walk back to his office.  He confirmed that I was Jimmy's grandson and had once lived in Artesian, just north of his home in Mitchell (Grandpa had been a delegate to the national convention in 1960.) Having connected by family and place, McGovern said, "Now, how do you think we should be looking at this bill."  I was very glad that I'd been coached by the PR people hired by NATA on what to say.  McGovern didn't respond with a canned response like Pressler had earlier in the day.  He thought and asked some clarifying questions - I knew he wanted to understand.  And, he didn't make any promises, but when he said, "I think I'm with you on this one and I'll have my staff look into this a little more, and we'll let you know how it goes" I believed him.

I was walking tall to the debriefing back at the convention hotel.  The PR team that was keeping track of congressional visit results looked at me a little doubtfully when I ticked off the members of congress I'd talked to that day.  I told them McGovern, and Inouye, were with us and probably Abourezk and Bedell, too.  I told them Percy's comment about the CWA probably meant he was not to be counted on, and I told them I thought Pressler could be flipped because I didn't think he understood what he'd theoretically co-signed.  I found out later that Pressler had eventually held back his support of the Bell proposal.  McGovern wrote me a note about a month later saying he thought the bill would not be acted on that year, and he thanked me for participating in the work of government.  The 'Bell Bill' never became law.

Talking to and being listened to by that collection of leaders that day was an unforgettable lesson for me.  There were nuances in the levels of awareness, commitment, and practice in the way each of those men listened and questioned, but all were masters of each. Congressman Bedell reminded me of my best college profs; McGovern was, of course, a college prof before he became an international political leader.  Being a teacher, at any level, requires daily application of the listening and questioning skills that Cashman talks about as crucial for leadership.  Teachers, like politicians, are always campaigning; they need to get votes of awareness, commitment, and practice from their students every day, sometimes hourly. Teaching is leading.