First thing on Tuesday we, my school's teachers, were shown how to create little tiles using polymer clay. We'll be doing an all school quilt/collage this fall. It was a great hands-on activity to do while we got acquainted again for the year, some of us for the first time at Marcy.

Wednesday morning we followed the directions sent to us on Tuesday evening via email. The email was sent to our principal who then forwarded it to all staff (that hierarchical passing of paper, even when it's electronic, is a hard habit to break.) The directions in the email proscribed the process we should follow to look at the initial assessments of the year for math. Our team did that and then used the remainder of the time adjusting the daily schedule so that it would actually work. We also talked about how we would do six groups of math with only five teachers - we have five classrooms each with half 3rd grade and 4th grade, on average. It looks like all of the 4th graders will be squeezed into two classes for direct math instruction. Those referendum dollars for class size management aren't making it to the 4th grade at our school.

Wednesday afternoon we all went to Olson school where we met in groups of about twenty teachers by grade level. The general topic was again math. We needed at least an hour a month last year that we didn't get and this was a way to catch up, but it still won't be enough to develop real mastery of the new math curriculum as fast as we need the mastery. We read some articles, watched a video and verbalized important points in the articles we had read that were passed out to us during the meetings. We had a 'parking lot' for questions which consisted of a piece of chart paper where we could attach sticky notes with questions to be explored later. I think it would have been much more efficient to do what we did via a Moodle course. Moodle allows learning groups to maximize face to face time by taking care of what can be done via online tools outside of the face to face time. Moodle also creates an electronic record of the interactions.

Thursday we had a great two hour presentation on the new curriculum we'll be using to prevent bullying. I was encouraged that online teacher forums are part of the curriculum. It's too bad that we'll be using 2002 technology consisting of pre-printed picture cards to prompt discussion with the discussion outline on the back of the pictures. It would be nice to have everything online so we could use the data projectors instead of cards; that would make it a lot easier for many kids to see the pictures. There's nothing in the boxes of materials that couldn't be online thus saving paper and making things easier to share.

On Friday, I traded in hour that I spent on Saturday with my student teacher planning lesson plan logistics for an hour at the State Fair where I attended the bacon haiku contest. I was a little disappointed because there was only about 10 minutes or less on haiku. It was impressive, though, to participate in an interactive Twitter discussion. It will definitely obsolete the clickers that we still have only gotten into a few of our schools in the MPS; that is, if we can allow cell phones in schools for kids to use in class. That will be a controversial introduction, no doubt. There was an impressive presentation of facts about just how fast social media is growing. Learning how to use new communications and information tools is not going to get less complex or less necessary anytime soon, I think. We need to teach teachers how to teach their students to become communications and information tool adopters and users. Avoiding the inevitable won't make it easier.
Posted by Dan McGuire at 12:11 AM No comments:

I've been thinking for a few days now about writing about professional staff development. Then just a few minutes ago I came across a link to Dean Groom's blog post, Leave Your Hat ON, about why it's important for teachers to blog. He's outlined very effectively why I as a teacher should blog. I think this is what happens when people are in a network. What Dean wrote almost a year ago is now pertinent to me and I'm able to share that with you because he wrote on his blog. He didn't have to write a scholarly article and get it published, or write a book; he just blogged. I'm not sure now even how I got to that link, although it must have been through Twitter or one of the blogs that I had linked to from Twitter. (Thank you to Brock Dubbels for inviting me to join Twitter last January.)

Why write about professional development?

In addition to the reason I linked to yesterday: Dean Groom's statement, "‘blogging’ your story, your extra-extra-curricula work and sharing that is probably the most important record of professional development right now – and the most effective way of getting you/me/us to challenge each other and make change in schools not only sustainable, but enjoyable and exciting," there's the fact the school district has listed improving teacher professional development as one of the five things that the district is doing to improve all schools. It's listed on page 3 of the multi-colored brochure (Warning: this link takes forever to load.) that was sent out with MPS student's MCA scores.


And, the state has laws about staff development. The law that was in effect last year in Minnesota is quite explicit about how money for staff development is to be spent by school districts. It's doesn't appear that the MPS actually spent the money as the law says it was supposed to be spent. The law also says that if the money isn't spent in one year then it is supposed to be carried over to the next year. I'm still trying to figure out why the money wasn't spent as it was prescribed, and it isn't clear whether the money that wasn't spent as prescribed will be carried over. And, it still isn't quite clear how the changes that the Mn legislature enacted this past May will effect how money is spent in the MPS. It appears, according to this page on the Education Minnesota web site, that if money is spent on staff development that the money is supposed to be spent according to the prescription outlined in the law.

In future blogs I will look more closely at how the recent referendum in Minneapolis impacts staff development, and I hope to specifically look at how 21st Century literacy tools are are being included in staff development efforts.

More on writing about Professional Development

This evening, I browsed through the various links on the MPS web site under the department heading for Staff Development. I noticed for one thing that money is not mentioned any where on the web site, at least, with regard to how it is budgeted and spent for staff development. There's mostly just links to IFL stuff. It appears that all MPS staff development falls somewhere under the umbrella of IFL. I'll write about whether or not it's really a good thing to be putting all our eggs into one basket at some later date; for now, that's the way it is.

Last Thursday, I participated in an event that I consider professional development that is not directly under the IFL umbrella, although it still might be possible to fit it under the IFL umbrella. My wife and I were guests of Project Success and the Guthrie Theater for a supper at the Mill City Museum and the play, When We Were Married. It was great. I got to chat with colleagues from Marcy and Dowling and a few other schools at a nice standing buffet in one of the conference rooms of the museum that I'd never been in before. The mayor was there, looking very gubenatorial (He can sling a long paragraph from memory as well as any of them.) He reminded us that our work as teachers is important and that the kids in the MPS schools have a chance at creating a culture that includes all 80 languages that they speak in a world that is increasingly global. Most of us already knew that, but it's nice to have the mayor noticing.

I'd never heard of J.B Priestly before - 20th Cent British Lit was one that I avoided- but I really enjoyed the play. Both my wife and I agreed that the characters were made to look too old, though. That's probably because the cast included a fairly substantial list of Guthrie old timers. They're good. I like being able to see what can be done with language. It got me thinking about how I can use language to help kids make movies of puppet performances in conjunction with the polymer clay residency that we'll have at Marcy this year. We might not get quite to the level of Wallace and Gromit, but we can try, or am I being a bit too "la-di-dah (p.11)"?

Anyway, it was a professional development that got me into meaningful conversation with my peers, expanded my knowledge base, inspired me to think about the curriculum for my students, and got me out with my wife to a great Mpls treasure. We'll see if the district staff development that's planned for later this week matches up. 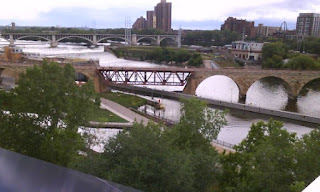 Marcy is just six blocks from the end of the Stone Arch Bridge - to the right, the east side of the river. 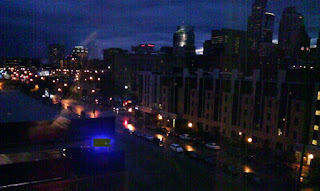 This was the first time I'd been to this stage and seen the view from this side of the building. It would, of course, be better if the picture had been taken with a little more light.
Posted by Dan McGuire at 8:55 PM 1 comment: